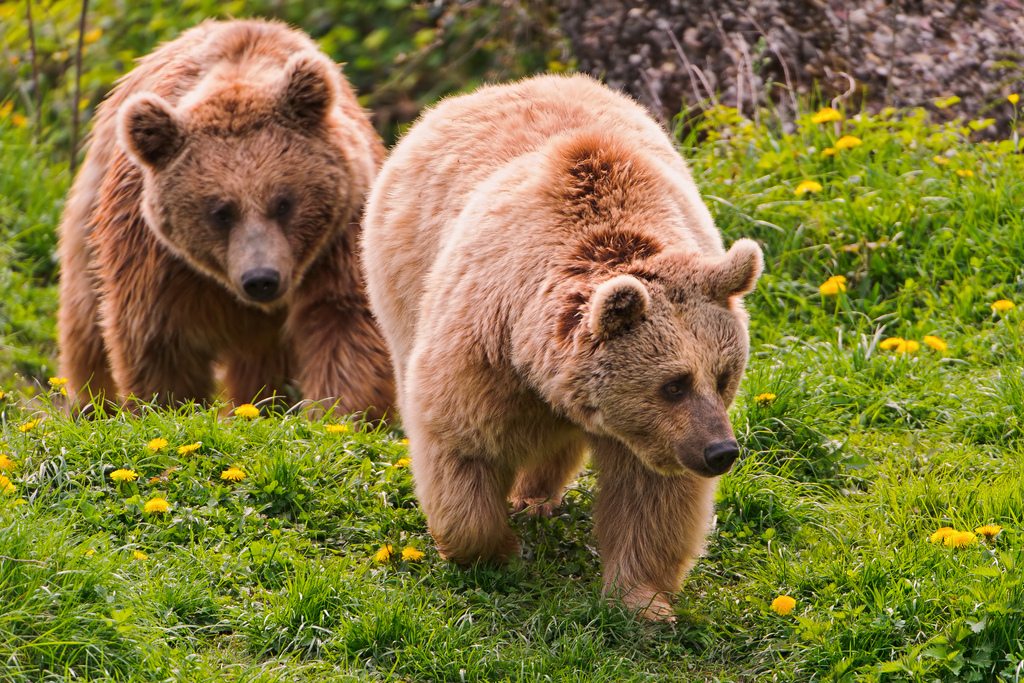 Bear spray is an interesting survival too that’s been on the market for years now, though is considered a bit controversial. Though, if you’re going to be spending time in the deep wilderness, then having a can on you isn’t a bad idea. This spray is essentially the same thing as pepper spray, but much, much stronger to help deter aggressive bears. If you use pepper spray on a bear, it may not have the necessary effect. If you use it on a human…well, there might be a lawsuit coming for you in the near future.

In light of a lot of research, bear spray is one of the most effective and non-lethal ways of fighting off a bear, at over a 90% success rate. So, you get to live, while the bear walks away virtually unharmed. Though carrying a can with you shouldn’t be the only precaution to should take when it comes to protecting yourself from bears, there’s nothing wrong with using it if the situation presents itself.

However, some people have had unfortunately experienced situations of bear spray going very, very wrong:

It might seem like a scene from a comedic cartoon, but accidentally spraying yourself with bear spray can happen. In 14% of cases, those who have used bear spray got hit with the negative side effects, experiencing symptoms ranging from irritation to being completely incapacitated. That’s why proper practice of bear spray use is encouraged before you ever head out on a trip where you might need to use it. Check out Sabered.com, where you can learn important information about using bear spray.

If you ever hear of a drive-by happening, it usually involves a person catching his or her victim off guard, shooting them, and driving away before anything can happen. On April 21st, in Brantford, Ontario, a man sprayed a victim with bear spray from inside his car, after the victim was asked for a cigarette he did not have. While we can be thankful it was only bear spray and not a firearm, really, who does that?

3. When You Forget Your Bear Spray at Home:

What’s even worse than having bad aim with your bear spray is forgetting it at home in the first place. Just imagine; a bear throttling towards you at full speed, you reach for your handy-dandy can, only to find that you didn’t check your to do list thoroughly before leaving the house. If you happen to find yourself in the same situation, then you should try what this guy did:

4. When This Guy’s Roommate Thought He Was Being Too Noisy:

Typically, having a roommate means being considerate of one another. When Joseph Gregory Isaac’s roommate came home drunk earlier this month, he couldn’t be bothered with the noise. That’s when he went for the bear spray, and assaulted his roommate with it. A little reminder: Bear spray should never be used indoors or on humans-even if that particular human might act like a bear.

If a bear can’t catch your smell because the wind is blowing all over the place, then it’s likely it is going to try to come closer to the source. If or when the bear does come closer, it can make spraying very difficult, despite the fact that bear spray requires less accuracy. Again, it’s important to practice using the spray in all different kinds of winds. Experts say to spray for at least six seconds to compensate for factors like multiple bears, wind, or other elements out of your control.

As it’s illegal to possess bear spray in the UK, a swinger couple purchased theirs in Canada. When Stephen Barclay and his partner Leanne Reid invited a stranger to their home to engage in some interesting activities, the stranger could have never expected he’d be sprayed with bear spray after refusing to pose for a mobile photo. There are many concerns one could have before engaging in such activities, but surely the use of bear spray wasn’t one of them.

For the Safe Users Out There:

At the end of the day, bear spray is something backpackers must have when hiking in bear country. Though there are a lot of benefits to using it, it can also wreak havoc if it’s not used properly. There’s a lot of information out there to educate hikers about using this spray safely and effectively. This includes information on how to properly store it when you’re not using it (so your roommate won’t surprise you!).

Bear spray, while obviously should never be used on humans, is believed to also be effective on other wild animals. That being said, you should always read up on various brands and see if they can also be used on other animals if necessary.

Before you buy any outdoor tool, you should know how to use it. Bear spray is definitely no exception. If you want to be part of the positive statistics, then make sure you’ve brushed up on your bear spraying knowledge and skills before bringing it along with you into the backcountry.

Fall Hiking: Layer Up in the Backcountry Without Overdoing It

How One Woman’s Hike Ended Too Cold, Too Fast

How to Find Your Perfect Hiking Mate