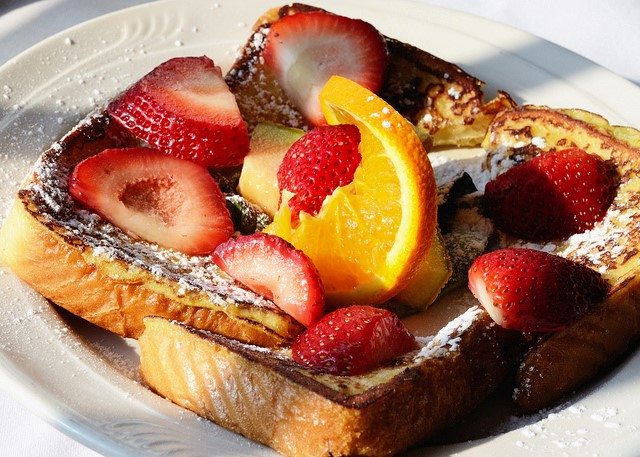 Are you tired of carrying around the same egg salad sandwiches and diet soda for every camping adventure? Maybe you should start looking at an easier, but definitely tastier option. French toast! I know you’re thinking, “But that’s a knife and fork meal”, and you’re right. French toast can often be a messy affair – even when backpacking through the woods. So, how about French toast that can be eaten by hand and in small portions? It’s time to introduce pull apart French toast at your next outdoor activity.

Not only is it easy food for camping, but it can bring a smile to the faces of those tired campers – even the one that just got bit by a giant mosquito. When out in the cold and damp campsite, nothing brings back some much-needed energy like a warm, soft, moist, and sweet bowl of French toast for breakfast. Let’s check out some of the easiest recipes.

It’s pretty obvious that when out camping, it isn’t possible to traditionally bake. So, most people would just forget about the “in-home” luxuries such as French toast. The Dutch Oven Campfire technique can, however, have you digging into a bowl before you know it.

All you need is a loaf of:

Deeply score the sourdough bread horizontally as well as vertically so that it looks like a flower when spread. Mix the eggs, cream, milk, and sugar together and pour it over the bread evenly. In a Ziploc bag, mix the flour, salt, some brown sugar, and pieces of butter to form a crumble. Sprinkle the mix over the bread.

This is the part where you need a little patience. Using tin foil, create a cover over the pan so that all the heat is trapped inside. Place the makeshift Dutch oven in the dying campfire so that it doesn’t get a lot of heat. “Bake” for about 40-45 minutes or till the smell of warm custard reaches the other campers’ noses. Remove the foil and simply pull apart each piece to have the most amazing breakfast with a view that matches every beautiful bite.

If time isn’t your friend, a pre-baked French toast recipe certainly will be.

What can be better than waking up to the sound of a waterfall and birds singing in the trees, right? How about the gooey goodness of an exotic crème Brulee French toast? Mouth-watering much? It truly is the best food for camping.

Making this for a camping trip requires it to be baked the night before so that it is still soft and absolutely scrumptious.

+ Preheat the oven to about 350 degrees and then score the bread with a sharp knife so that it resembles a chess board.

+ Remember that you need to score the bread ALMOST until the end. Line a cast iron skillet/baking dish with some tin foil and place the bread in it.

+ Now, mix the eggs, vanilla, cinnamon, and half and half till it is light and creamy. Pour this mix into the crevices of the scored bread so that the yumminess reaches deep into it. Sprinkle the pecans over the bread and into the slits so that every mouthful gets a piece.

+ In a pan melt some butter and some brown sugar to create a thick sauce and then pour it over the bread.

+ Place the dish into the oven and let it bake for about 30 minutes or until you see the top caramelizing. Remove the toast and let it rest till it’s cool and then pack it under a cloth.

French toast is a classic breakfast dish, but taking out for camping trips was not what it was intended for. These simply decadent recipes will ensure that you and the other campers are left wanting more. While sandwiches and salads are also great for camping, they often get too mundane or “boring” (for the lack of a better word). Taking something that traditionally belongs on a kitchen table, served with a knife and fork and enjoying it in the clean, fresh air makes it so much better. So, go ahead and give these pull apart French toast recipes a try today – but only if you’re going camping tomorrow.

Lucy is camp editor at Getcampingwild.com. She grew up in a suburb of Oklahoma and I have been camping my entire life. Camping in the wild is a way of life for her.

10 Tasty Summer Snacks for the Outdoors

These Backcountry Memory Ideas are Easier Than Pitching a Tent!

How to Pack for Your Camp Kitchen