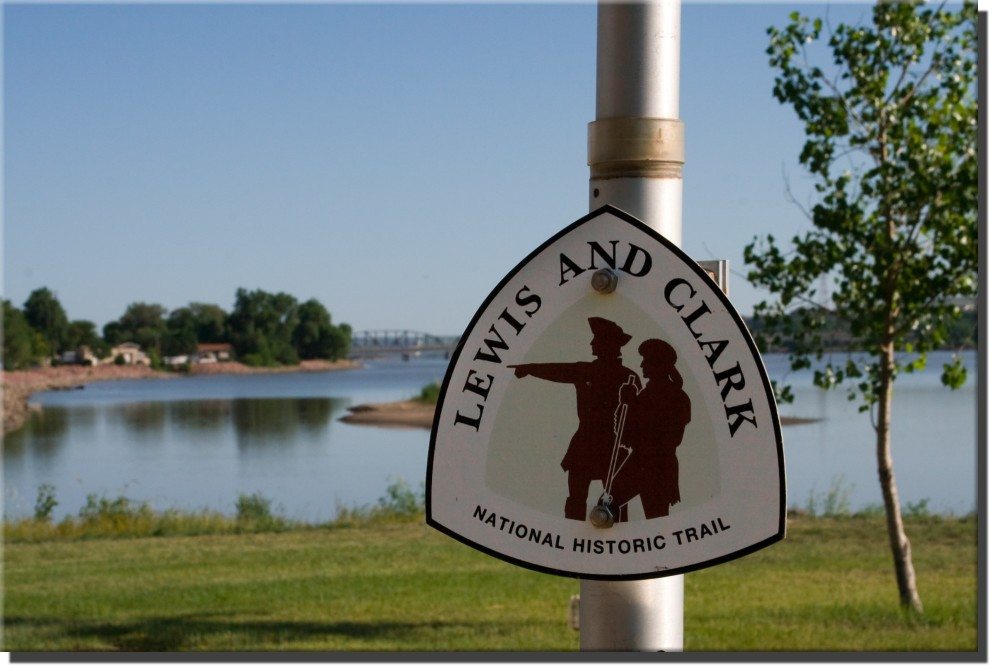 The Lewis and Clark Expedition was the first of its kind to explore the Western Frontier of the United States after the Louisiana Purchase. Lewis and Clark began their journey 1804 near St. Louis from the Mississippi river, and continued until 1806 when they finally reached the Pacific Ocean. Their journey has sparked historical discussion, encouraged other explorers, and even became the basis for many films till this day. Lewis and Clark, on their Corps of Discovery Expedition as it was also called, were the first true ‘American backpackers’. Today, many of the trails they hiked are now highways, but you can still hike parts of the historical Lewis and Clark National Historical Trail yourself:

Camp Dubois is where the Lewis and Clark Expedition began. Near present day Hartford, Illinois, men of the expedition came together to prepare for what would be a long and unpredictable journey. Visitors can come to the camp site to see a replica of where the men stayed, as well as get a history lesson of the journey. Those eager to get backpacking can then explore the land along the Confluence Greenway, where many parks and recreation areas are a great place to start your journey, just as Lewis and Clark did over two hundred years ago.

Lying along the Mississippi River, beginning in Illinois and passing through three states-Iowa, Minnesota and Wisconsin, the Great River Road has a lot to offer visitors who are looking for a historical adventure. Whether you prefer hiking, bike riding, a scenic drive, or even a beautiful winery trail that follows up the river, there is something here for everyone who wants to explore the trail just as Lewis and Clark did.

This South Dakota part of the Lewis and Clark Trail is right at the edge of the state where the explorers first entered, and is believed to be the site of where the first US election west of the Mississippi took place. It is one of the last free-flowing segments of water from the Mississippi River, where seven miles of hiking and biking trails will let backpackers relive the days that Lewis and Clark spent here. The Lewis and CLark Recreation Area provides visitors with a chance to swim, fish, and even practice their archery skills.

A huge part of Montana’s history can be attributed to the discoveries of Lewis and Clark. While there are many natural areas you can visit in this state, Lewis and Clark are said to have seen the Great Falls of the Giant Springs Heritage Park after coming from Missouri River. This park is home to both the smallest river in the world, Roe River, and one of the biggest freshwater springs in the world, the Great Spring. Come for a peaceful hike or check out the Madison Limestone Formation.

Lolo Trail is located in Nez Perce Historical National Park, which stretches over four states-Oregon, Montana, Idaho, and Washington. However, this trail is mostly in Montana, within the Lolo National Forest. The Lolo Trail was one of the most difficult portions of Lewis and Clark’s Expedition, which took 11 days of grueling hikes through rugged mountain terrains, while they suffered from ailments like malnutrition and frostbite, which they recorded in their journals. Nowadays, backpackers will have a bit of an easier time here than Lewis and Clark on the Bitterroot Mountains here, and can do many activities ranging from hiking, fishing, camping, biking, horseback riding, to water sports, scenic drives, hunting, or just nature walks.

Cape Disappointment State Park is located in Washington State, where the expedition nearly ended. While Lewis and Clark weren’t the first to stumble upon this area, they were the first successful ones. Nearly 30 miles of beach, numerous hiking trails, and two lighthouses await adventurous backpackers and historians. Whether you come to explore the area as Lewis and Clark did, or come to hear more about their journey, this spot is a great place to complete the entire trip.

A Backcountry Guide to Hiking Alaska