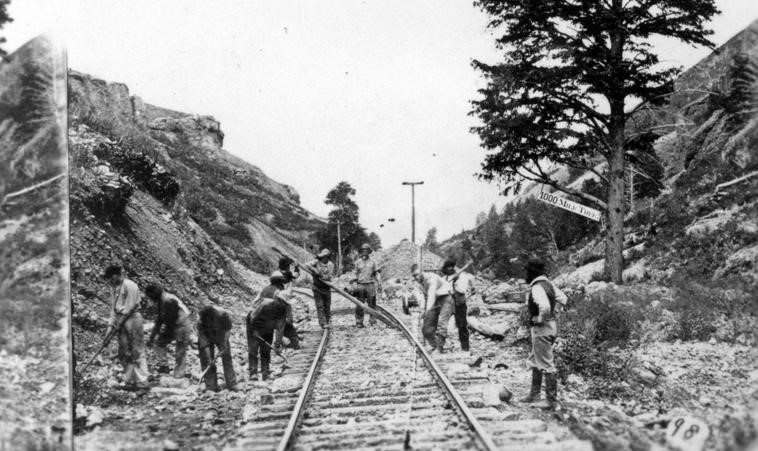 After the discovery of the Western Frontier, the US worked to create what was called ‘The First Transcontinental Railroad”. This railroad was constructed in the 1860’s, and was built west of the Mississippi to the Pacific, connecting an already existing railroad in Iowa that served the eastern part of the United States.

The Railroad was considered a huge breakthrough point in American history, as it would allow the transportation of supplies easily into the West. At one point, the Transcontinental Express allowed people to travel from NYC to San Francisco directly, although it did take quite a few days. Nowadays, hundreds of miles of the original line are still being used in one way or the other, even though the first tracks have been replaced. However, if you want to explore and see what passengers once saw out their windows as they rode the train many years ago, then here is where you can visit:

While constructing the Overland Route of the Union Pacific Railroad section, workers suddenly noticed a random tree that was standing beside the tracks they were laying out. Coincidentally, they discovered that the tree stood exactly at the 1,000 mile marker of the railroad’s progress from its starting point in Iowa. In Henefer, Utah, you can visit a new Thousand Mile Tree, which stands where the old tree had once been (it died long ago). The tree sat between Devil’s Slide, a strange geological phenomenon where two limestone ridges run up from the canyon that you can still see today. This section of the railway was once known as Wilhelmina Pass. Although I-84 dominates this area now, backpackers can still enjoy hundreds of miles of hiking trails around Weber River.

Parts of the Transcontinental Railroad were built in tunnels in order to bypass mountains. One of the biggest chains of tunnels was located at Donner Pass in the Sierra Nevada. Now, there is a trail here that will take you through the tunnels, where you can see parts of the abandoned railroad tracks. One part is the Summit Tunnel, and the other is the China Wall, while not quite as big as the Great Wall, is a tribute to the many Chinese laborers who built the railroad. You will take a literal ride through history and explore what was once a huge part of the Transcontinental Railroad. Bring a headlamp, as these tunnels are very dark. However, there are moments where you’ll see spectacular views of Donner Lake.

Located in Wellington, Washington, the Iron Goat Trail is located northeast of Seattle, and runs along the abandoned trails of the Great Northern Railway section. Here is the Cascade Tunnel where the trains were able to make their way through the Cascade Mountains. However, an avalanche that hit this area in 1910 killed nearly 100 people and destroyed most of the area, which has since become somewhat of a ghost town. Although the Iron Goat Trail is short, around nine miles, there is plenty to see, including the old railroad grade. Hikers must be careful here, as the tunnels have experienced failures and could theoretically be due for more dangerous failures at any time.

Near the Great Salt Lake, Golden Spike National Historic Site is the spot where the Union and Central Pacific Railroads finally met, completing the construction of the Transcontinental Railroad. While there is plenty of history to see here, including visiting replicas of the original locomotives used, observing the original grades, or watching re-enactments of the celebratory event, there are also activities for those who came for hiking and adventure. One trail is the Big Fill Loop Trail, a short hike where you can see evidence of the hard work put into constructing the railroad. Another trail, though while not really a hiking trail, is the Transcontinental Railway Drive, where you can do some exploring on paved roads that are actually where the original railroad once stood.

Although it isn’t quite the same, those who want to reminisce and feel like they have gone back in time to experience the Transcontinental Express themselves, can opt for the California Zephyr, run by Amtrak. The train begins in Chicago, Illinois and runs through Iowa, Nebraska, Colorado, Utah, Nevada, and lastly, arrives in San Francisco. While a long ride, it is not the longest in Amtrak route, but it is by far the most scenic and the route that closely resembles that of the Transcontinental Railroad. The trip takes a little more than two days, and is definitely worth all the sight-seeing.

5 Reasons Why Canada Belongs on Your Backcountry Bucketlist