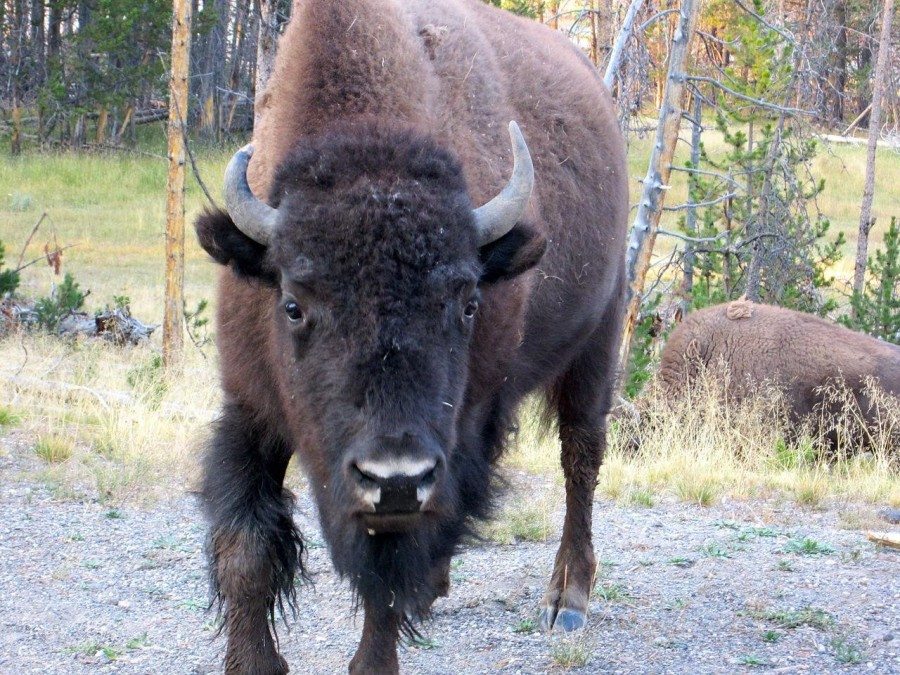 Last week, a woman broke the internet, but thankfully no bones, after she attempted to take a selfie with a wild bison in Yellowstone National Park. Although this 43-year old woman from Mississippi was very lucky in an incident that could have potentially ended very badly, she is not the only person to survive a close call with a wild animal. In fact, there have been more than five terrifying bison encounters in Yellowstone this summer alone, according to the National Park Service. As amazing as wildlife is, it’s important to remember that, when in the backcountry, we’re in their house and we have to treat these wild animals with respect to avoid getting hurt.

Here are a few other times that humans got too close for comfort that didn’t make the rounds on Facebook.

Lock Your Doors and Windows!

According to USATODAY, in March of this year, Tom Carter was visiting Yellowstone in his parked SUV, when a bison came charging at the vehicle he was in. The incident totaled the car, doing nearly $3,000 worth of damage. Carter had once been a tour guide in Yellowstone during the 70’s, but in all his years, never anticipated something like this happening to him.

If You’re Close Enough to Pet it, You’re too Close

In 2012, a group of young students and some adults who were supposed to be ‘chaperoning’, were visiting Yellowstone when they approached a bison – that’s right-they willingly walked up to this 2,000 pound animal, despite the obvious dangers. As if they couldn’t possibly guess what would happen next, the bison not-so-suddenly, charged at and chased after the students. Luckily, they got away by the hairs on their chinny-chin chins.

In May of this year, tourists at Yellowstone got a pretty big shock when they noticed a black bear and her cubs, and decided to get out of their cars to take some photos. Mama bear did not like this very much at all, and she and her cubs began running towards the tourists. It was all caught on video, and fortunately, the bears ran away before doing any serious damage.

Three years ago, a family was camping at Nehalem Bay State Park in Oregon, which had at the time seen a string of coyotes attacks around the area. However, this family didn’t expect to fall victim to an attack themselves. According to KGW, when the family was returning to their campsite after watching the sunset, their 5 year old daughter was dragging a stick behind her. A coyote came forward, lunged first at the stick, then the little girl’s back, before it ran away. The girl was treated for the cut on her back and rabies, but the mental damage probably took a much longer time to heal.

Robert Biggs was hiking near Whiskey Flats in California when he stopped to admire some bears. Suddenly, a mountain lion jumped onto his backpack, and got onto his arm. Even more surprising after that, a bear came, grabbed the lion by the neck and wrestled it to the ground. They both ran off, and so did Biggs, of course, into the arms of his bewildered wife back at home. Biggs remained calm while he bled into a t-shirt he had wrapped around his arm.

Anne Hjelle was hiking in the Santa Ana mountains of California one afternoon in January of 2004 when a cougar suddenly pounced at her, ripping off the flesh from her face. Luckily, she had a friend with her who grabbed onto her legs, trying to pull her away from the cougar as it dragged her the opposite way. Two male bikers nearby heard the screams, and rushed to help. The mountain lion eventually ran off, while Hjelle recovered her consciousness. It was a long road to recovery, but it could have been much worse.

According to ABC News, in August 2013, Abby Wetherell was jogging on a trail near her grandparent’s house in Cadillac, Michigan, when she saw a bear in her peripherals. The heavy black bear mauled her, but she managed to escape. However, the bear ran back after her, attacked her once more, and Wetherell decided to play dead. The bear eventually ran off, and Wetherell ran back to her grandparent’s house. She was treated with over 100 stitches for various puncture wounds across her body and face.

According to WQAD8, a couple of women were hiking in Black Hawk, Colorado in May 2014, when they came across a moose. The women were with their dogs when the moose became agitated, grunted, and charged towards the ladies. One of the women, Jacqueline Boron, was left with staples in the back of her head, 15 stitches on her leg, and four broken ribs, as well as a very lucky story to tell.

Michaela Lee was out for a hike near Fort Steilacoom Park in Lakewood, Washington one day in July 2012 when two raccoons attacked her after Lee’s dog chased after them. She suffered over 100 lacerations and 16 puncture wounds, all of which she had to receive injections in, in addition to well-needed rabies shots.

All About That Camper Van Life 101

This Map of Saskatchewan Was Made by a Blogger