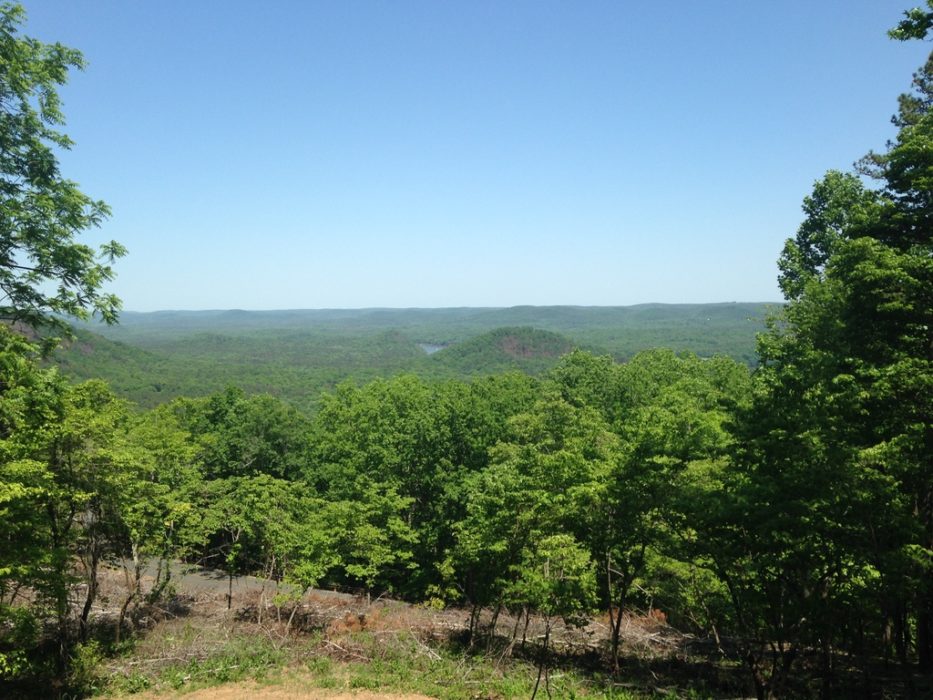 You can see this little mountain rising off the shore of the Pee Dee River from the top of Morrow Mountain, and even better during the fall from the back side of Sugarloaf Mountain. It Looks almost like a perfect cone off in the distance, and since the first time I saw it from the sugarloaf trail I wanted to get to the top. Not because it was big, or because of the lack of a trail, but rather for the same reason Mallory wanted to summit Everest, “Because it’s there.”

So I went about preparing for this trek the way I assume any adventurer would do so, I surveyed the land using apps like Alltrails and the map feature on my Iphone, as well as checking out websites like mapquest.com or google maps. I diligently studied the trail maps of Morrow Mtn. to determine the best route to take to get me close to where I needed to go off trail. I decided to start at the equestrian trail head parking lot and bear left on the Sugarloaf trail. From there I would take the short hike through the primitive campgrounds and once there, turn north and head up the southern face of this short but radiant Tater.

I had no idea how long it would take to surmount this tiniest peak but I figured I would spend most of the day bushwhacking my way up, so I tried to set up my gear list accordingly. I loaded my day pack with water and a couple peanut butter sandwiches, a small first aid kit (safety first) an old poncho and a machete. I had no idea how much brush would be between me and my glorious trophy. Once the gear list and approximate trail was decided on, I only had to wait a few weeks before the perfect day presented itself, and I set off on my grand trailblazing adventure, June 4th, 2014.

The day was upon me, and much like the mountaineers of old I jumped into my old jeep and slowly drove the hour or so west to Morrow Mountain State Park. Once I parked the jeep and set up “Base camp” I gathered my aforementioned gear, along with my trusty walking stick and heading into the great unknown. Surprisingly only thirty minutes later I found myself in the primitive campsite and at the end of my blazed trail. I checked my Alltrail app for the direction, checked my compass for north, made a ninety degree right turn and headed downhill.

At first downhill seemed wrong for trying to go up a mountain, but it was a short drop to the equestrian trail and back up I went. The leaves were thick and green enough that I couldn’t physically see the big hill, but since it was the only rise in the area as long as I continued up I would make it. Fortunately for me the park staff must have burned earlier in the year, the way was almost clear except for the sapling trees. The climb was not a major struggle by any stretch of the imagination, but it was slightly more taxing than I thought it would be. It was a constant roughly 45 degrees and I was going straight up, no switch back action for this old boy, I was getting straight to the top.

At one point I did start to veer off towards the eastern face, the side along the river. This part becomes more like a cliff and the entire mountainside is littered with loose rocks, so I turned more to my right to keep from sliding into the drink.

After another forty minutes I hit the grand summit, a very rocky tree covered hill top. The vegetation left me with little to see, but I could make out the other mountain tops around me. I certainly was not the first person to reach this peak, as I found a large cross made from stones gathered up on the peak. I sat down, ate my lunch, and thought about the next time I would climb this tiny beauty, probably during the winter for a better view. And at that point I’ll probably shoot for Mill Mtn. as well, an even tinier mountain in the park, also lacking of trails. Why? Because it’s there.

previous Blogging Your Hiking Experience: An Interview with John Bresnihan
next Are You Up For This 100 Mile Hiking Challenge?