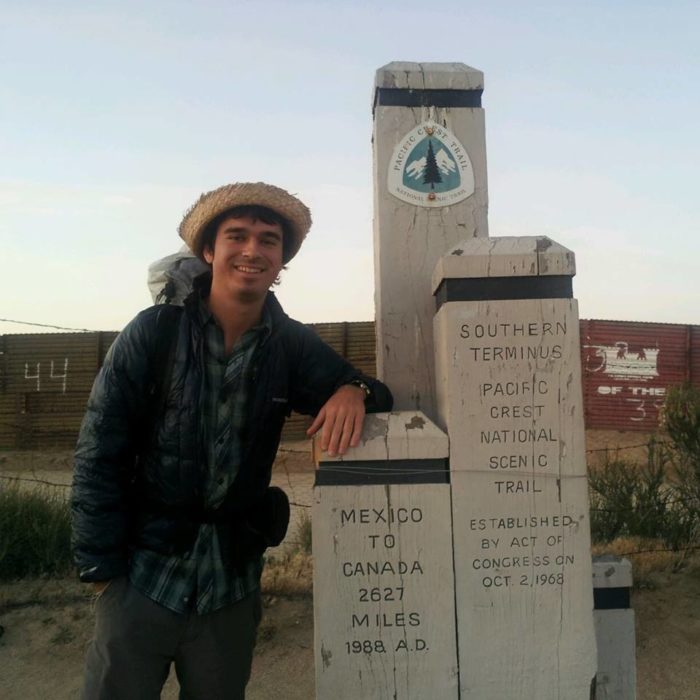 A few weeks ago, I was introduced to John Bresnihan. Bresnihan not only has experience hiking several major trails in the United States, but also on the other side of the world. I found Bresnihan’s stories to be interesting, not only because of what he’s done, but because he’s been blogging about it.

Bresnihan began hiking in college when he joined his school’s Mountaineering & Whitewater club. After a year of going on hiking trips, Bresnihan eventually started leading trips himself, some trips being sections of the Appalachian Trail. This is where he learned about ‘thru-hiking’, and in 2011 after his graduation, he hiked the entire AT. There, he got “gypsy blood”, in which he desired to travel and hike more. This led Bresnihan to move to South Korea to become an ESL Teacher, where he quickly became active in the hiking community, helping out with a club called Seoul Hiking Group. After two years in Korea, Bresnihan returned to the U.S, where he did another thru-hike on the Pacific Crest Trail. He recorded his entire journey by blogging it on his site. I interviewed him to find out more:

What made you start blogging? Is there anyone who inspired you?

I’ve never really considered myself a blogger, more of just keeping a public journal. When I thru-hiked the AT, I didn’t have a WordPress blog, but just an account on Trailjournals.com. Lots of people doing long hikes record their progress while hiking through blogging on this site. Every night in camp I would write down the day’s events, and then every 4 to 7 days when I would get to a town to resupply, I would find a computer, usually at the local library, and then sum up the journal into a post. It was a good way to let friends and family know how the hike was going, what exactly I was experiencing, and that I was still alive. I didn’t have a smartphone back then, so I couldn’t post pictures. It was just my words.

As the hike went on I started getting lots of messages of encouragement, from friends and complete strangers who were just browsing through the website. After I finished, for months, I was getting messages from people who said my Trailjournal inspired them to do the AT, and they were asking questions about the hike, like gear choices, diet, trail conditions, weather to expect, etc. It was knowing that my words inspired people to get outside and do something that really motivated me to “take the next step” and get a proper blog for the next big hike.

My WordPress blog for my PCT thru-hike was also just a Trailjournal of sorts, meaning the majority of my posts were just recordings of the days’ events. The blog was my journal. I’ve found it to be a great way to really reflect on what it was I was doing. To sum up the day and to go back and read what I had written before, it was fascinating to see my enthusiasm wax and wane throughout the course of any length of time. A week or a month later, to look back and think “that was a great day” or “oh man that was terrible”. It required dedication. I was physically depleted at the end of every day, and really didn’t want to journal some nights; but I did my best.

A lot of people have a hard time staying motivated when they blog. How do you stay motivated? What advice do you have for people who get discouraged?

I think what motivated me most was knowing that people were reading it. So many people can’t do what I’m doing, and they follow me along the trail vicariously. I thought a lot about how my previous Trailjournal had inspired some people to get outside and start hiking, and I wanted the same result with this blog. I wanted people to know what it was like to be out there doing it.

I guess if I had any advice to people who were struggling staying on top of their blog, I would tell them to approach it as they would with any sort of writing, which would be to figure out what your mission is in writing it, and to see if you are making progress in accomplishing that mission. Whether it be to inform, entertain, or inspire, if it is something you really, really want and are serious about, I think the motivation to write will come naturally.

What was your favorite story to write about?

One of the post-hike entries I did was a “Top 10 Days on Trail”. That post was meant to just sum up the highlights of the journey. They were the ones I felt were worth revisiting, to add more thoughts on the matter. Any day that something exciting or out-of-the-norm happened, whether it was seeing a bear or a herd of elk, weathering an intense storm, or passing by a famous landmark like Crater Lake or Mt. Rainier, I would write. Tip-toeing the icy ledges of Mt. Whitney or attempting to scale Half Dome in the rain; anything that risked potential death, that really got my blood pumping, was always fun to write about after the fact.

Did you have any difficult moments (while on the trail, while blogging, or just in general)?

On a five month journey like this one, there are bound to be some bad days. Days where nothing goes right. One of the challenges that I had on the PCT that I didn’t experience on the AT was that I met someone. Establishing and maintaining a relationship on a hike like this is hard. We see each other during our best and our worst moments. Both of us coming out here on our own, we had to ask ourselves if we were doing the right thing staying together. Were we helping each other or holding each other back? In the end it all worked out. The good times outweighed the bad and we finished the hike together. We’re still happily together to this day. But it was sometimes a challenge to figure out how much I wanted to share on the blog. In the end I didn’t share so much because I felt it didn’t really add to my overall goal. I didn’t think my audience cared much about relationship drama, nor did I think it was much of anyone’s business.

My partner and I are heavily considering doing the Continental Divide Trail (CDT). The AT, PCT, and CDT make up what is called the Triple Crown of Hiking. They say you either do one or you do all three, and I’ve done two of them so I guess I’m doomed to do the CDT eventually. But there are loads of other trails we want to do, like the Te Aroroa in New Zealand, the Grand Enchantment Trail in Arizona, the Colorado Trail, the Idaho Centennial Trail, etc. This list could go on and on.

Bresnihan is currently back in South Korea. Follow his blog to read about his experience hiking the PCT.