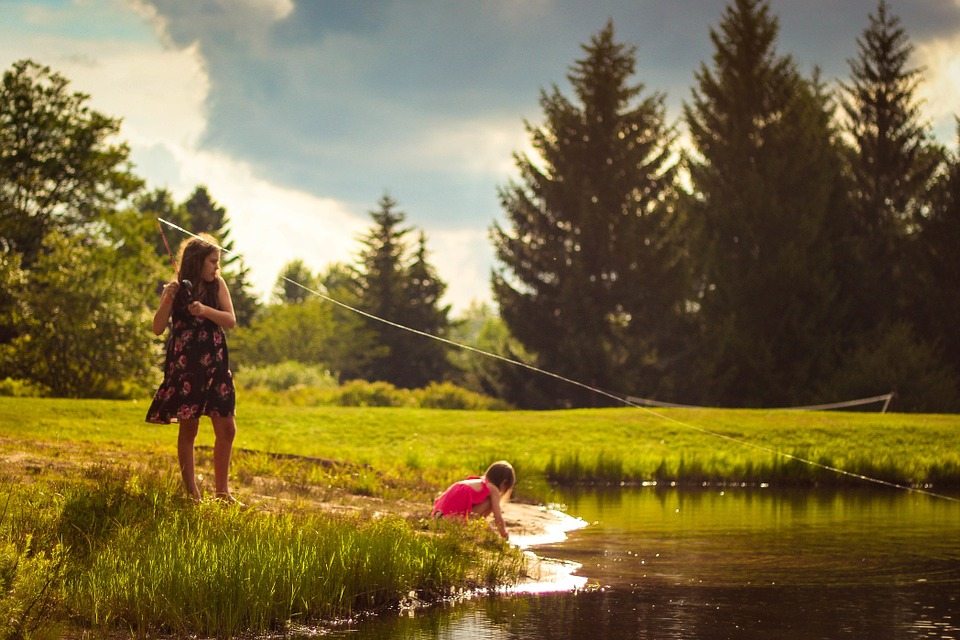 There’s really nothing like an authentic camping experience. The kind where you don’t mind getting as dirty and rustic as possible, taking in the outdoors as much as you can.

And, this goes for eating at the campsite as well. While you can always bring food to cook with you, sometimes taking the extra step to use the resources outdoors as your food adds to it all.

But, you can’t just live off of berries! And, unless you are a professional hunter, you can’t bank on surviving off of game animals, either. That’s why learning how to catch and cook a fish in the great outdoors is a necessary skill. We’re going to teach how to do it!

Remember, it’s all about the four C’s!

While some people can catch a fish with their bare hands, others have a harder time of it, even with all the proper tools. But, if you want to be sure you’re going to be having dinner at your campsite, then it’s best to have your “devices” at your disposal.

When you have to catch a fish in the backcountry, you need a few things. First of all, you need to have a fishing permit. If you care about the environment and respecting the parks and campsites you’re at, don’t try to get around this. Then, you’ll need a fish-hook and bait, a fishing line and a fishing pole. Lastly, you’ll need a sharp knife to cut the fish. Simple. Now you’re ready to fish.

Using the tools we gave you (and the permit; don’t forget the permit), get yourself in place to catch a fish. Obviously, this means getting close to a water source you’re allowed to fish from, being sure that the water and fish are safe.

Now, the catching part. First of all, give yourself time to catch the fish. If you’re trying to catch the fish at 6 PM and dinner is at 7 PM, you’re taking a risk. Fishing should be an all day activity. Start out early in the morning, and if you make your catch, you can return to the campsite early.

Once you arrive at the lake, get close to the water, but not too close that the fish will be scared by your shadow. Try to head to where the wind blows, as there are insects that get caught in the wind that the fish like. Fish also like to swim around floating vegetation and rocks, so that’s a good place to aim your pole.

When you feel ready, throw in your pole. If you feel a bite, pull back quickly, the insert the hook into the fish. Move stealthily, because going too fast or too slow can lose the fish. Once you get it closer to you, pull it out, and if you need to, put it out of its misery.

Once you get that fish back to your campsite, it’s time to clean it. Lay the fish down on one side. Using the knife, cut a diagonal line from the top of where the skull ends and where the flesh starts, going underneath the front fin to the underpart of the fish. Then, turn the knife, start your new cut where the first cut ended. This should be at the underbelly of the fish. Going just about an inch in, cut through the flesh along the body until the dorsal fin. When you reach the end of the rib cage, stop. Puncture the knife through to the other side. Saw it down to the tail where the knife will slide off. Then, repeat on the other side. When you have the two slabs of meat, separate each one from the other side of the skin.

This is filleting the fish.

There are other ways to clean fish, of course, like skinning and scaling, but filleting is an easy way to get everything done at once. Though, some fish, like salmon or catfish, may require more steps when it comes to cleaning it.

When you’re done, rinse the fish in cold water, and remove any excess skin or scales.

As Forest Gump said, “You can barbecue it, boil it, broil it, bake it, saute it…” Of course, Tom Hanks was talking about shrimp, not fish. But, you get the point. There are a lot of ways to cook a fish. And, though sushi is delicious and all, we recommend definitely cooking it, as it helps get rid of a lot of the bad stuff.

Now, you can always cook a fish the easy way. If you’re at your campsite and you have a cooking stove and a pan, just fry it up. But, if you want it the classic way, cooking it over the campfire, it’s going to take a few more steps. Stick some clean sticks through the fish it can be held still. There are different methods to arrange the sticks, but the most important thing is that they won’t rip through the fillet once it starts cooking. When the fish is set, use long sticks to raise the fish above the fire, and let it cook. Make sure to flip it to cook it evenly on both sides.

So, doing all this may not be as easy as it sounds. But, the only way to learn how to catch and cook a fish is by trying it yourself!

8 of the Top Water Filters on the Market

7 Ways to Call for Help When Lost or Hurt Outdoors