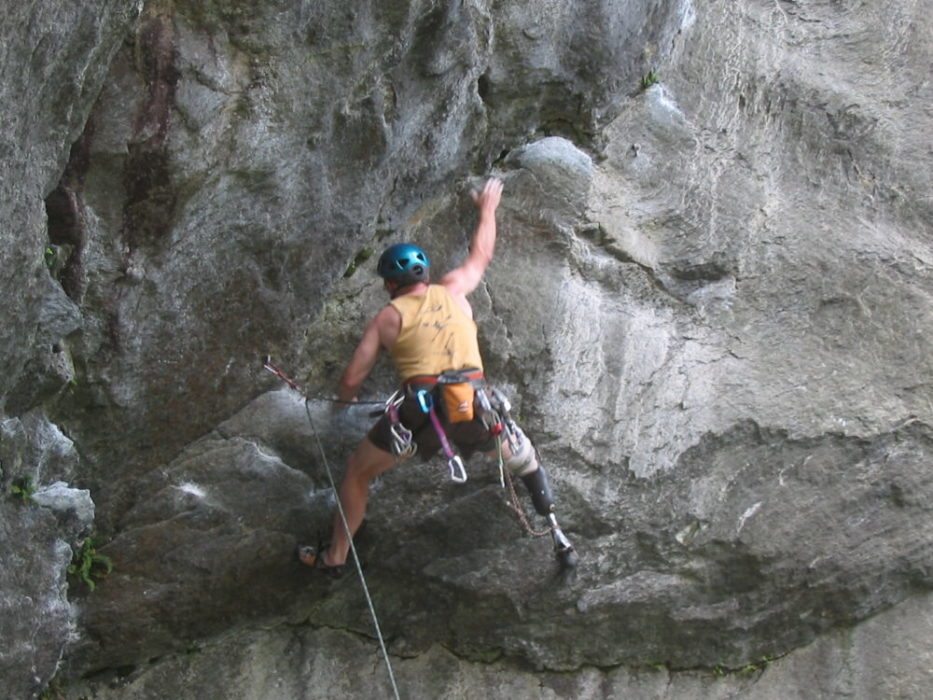 There are a lot of good reasons to avoid technology in the outdoors, but also reasons to praise it. Though many people plan trips to the backcountry to escape the distractions, there are others who wouldn’t be able to hike without such advancements. Say “hello” to these amazing hikers, who have beat the odds thanks to a little thing called technology.

If you haven’t yet heard about Stacey Kozel, you definitely won’t forget about her now. According to the Washington Post, Kozel has technology to thank for allowing her to hike after lupus paralyzed her legs. And, she’s not just doing an ordinary hike either, she’s taking on the Appalachian Trail.

Knowing she couldn’t do the AT in a wheelchair, this outdoor enthusiast searched for other alternatives to help her reach her dream. After going through hell and back with her insurance company, she was finally approved to get the C-Brace Bionic Exoskeleton. The devices, when strapped to her legs, function to help her walk. Sure, she needs some hiking poles to assist her, but who doesn’t?! Though Kozel couldn’t have done it without her positive attitude, the technology certainly helped, too.

There aren’t a lot of people who haven’t seen 127 Hours, but if you happen to be someone who hasn’t, then this is a great story of someone who has beat the odds. Aron Ralston was hiking in Blue John Canyon of Utah when his arm got crushed by a boulder. Long story short, the only way for him to survive was by cutting off his own arm. Ralston needed to utilize a few technological tools that helped him get through this insane experience.

Ralston was able to use a video camera to record a video saying goodbye to his family, that thankfully, wasn’t his final farewell. Thanks to a pocketknife, he was able to amputate his arm, and made his way as far out of the canyon has he could before being noticed by a hiking family. Today, Ralston still continues to hike and climb mountains, with the use of a prosthesis to aid him. Prosthetics have helped many people be able to hike.

Hiking thru-trails like the Appalachian Trail is hard for anyone, as less than 25% of the people who attempt it actually complete it. But, what if you’re blind? Walking in general can be a pretty difficult task if you’re unable to see. Of course, hiking one of the hardest trails in the world would seem impossible for a blind person.

But, not for Mike Hanson, who has truly beat the odds.

Thanks to technology, the attorney from Minneapolis was able to do something most people without visual impairments can’t even do. Hanson used a GPS and trekking poles to complete a large portion of the AT in 2010, despite being visually impaired. His achievement shed light on the importance of technology in the backpacking community.

While Mike Hanson’s story is certainly unique, he’s not the first blind person to hike the Appalachian Trail. That goes to Bill Irwin, who did it in 1990. Unlike the time period in which Hanson hiked, the technology available in Irwin’s time wasn’t quite that advanced. The only thing Irwin had to help him was a guide dog. If you’ve ever heard of the “Orient Express,” it refers to these two, as Irwin’s German shepherd was named “Orient.”

So, you might be wondering how exactly a guide dog is considered “technology.” Well, remember, the definition of technology is “the application of scientific technology for practical purposes.” Someone figured out that a dog was capable of leading the disabled, and they have since given everyone an equal opportunity to do what they love.

There are other hikers out there that are also able to hike with the help of a guide dog. One is Trevor Thomas and his dog Tennille, who have hiked over 18,000 miles since 2006.

Too much TV is never a good thing, unless it helps nine-year-old boys like Grayson Wynne survive in the backcountry. In 2009, this young boy was hiking with a large group of families in Ashley National Forest in Utah, when he got separated. Immediately, the skills he learned from the TV show “Man vs. Wild” on the Discovery Channel, helped Wynne beat the odds.

The specific thing Wynne remembered to do was to tear up pieces of his rain jacket, and tie it to the trees so rescuers could find him. It wasn’t too long (okay, eighteen hours) before a helicopter flew overhead. Using the last piece of his jacket, the boy flagged down the rescuers. He also used other techniques to help lure rescuers, including leaving his food wrappers, footprints, and following a creek to try and get to safety. Parents might think differently about TV because of him.

These amazing people have beat the odds, despite being born with or facing conditions that have limited them. And, it’s all thanks to some positive vibes and advancements in technology.