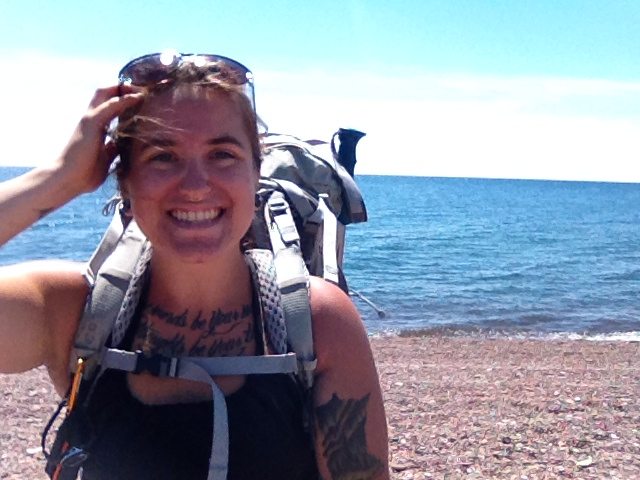 When I met Angela Goettl, I was excited to learn that she was planning on hiking the Superior Hiking Trail by herself. I didn’t know much about her at that point, but I couldn’t help but be intrigued by her passionate hiking goals. Following Angela closely, I was eager to see where her hike would “take her.”

Then, one morning, I had a message from Angela. She informed me that the trail was way more difficult than she thought. After a few days, she wasn’t able to continue. She had encountered a lot of factors along the way that made it truly impossible for her to carry on. Though she may have been a bit disappointed, I was really inspired by the reality of her story. While anyone can hike, not everyone can do what they set their mind out to do right away. It takes a lot of time and preparation, especially when it comes to a thru-hike.

I asked Angela if she could use her experience to teach others. I wanted to know that if she could go back and do it again, what she would have changed, if anything at all. Her experience, I thought, would be very useful to people who have had similar experiences. Those who are wondering why they couldn’t accomplish what it seems like everyone else has been able to do. I wanted people to see Angela’s experience not as a “failed attempt,” but instead as an an inspiration to understand our limits before we take on a difficult trail.

It’s the other side of hiking that no one talks about, and it needs to be heard.

This was our conversation.

What was your original inspiration for wanting to do this thru-hike?

Last Thanksgiving, my Aunt Judy was telling me about this book she had read called, “Wild” by Cheryl Strayed. Only hearing little bits about her story from Judy, I already began thinking. “Wow, I really need to do something like that.” The next weekend I got a hold of the movie during Black Friday weekend at Target. Soon after that, I got a hold of the book.

Although our stories are different, watching and reading about Cheryl’s loss hit very close to home. I did not lose my mother, but in May of 2014, I lost my younger brother, Grant, to a drug overdose. This hike was meant for him. Living in Nashville, TN, almost 900 miles from home, it had been very easy to forget what happened. I didn’t have to cope with it, but just go on with my everyday life. For me, hiking provides the space to be free of distractions. Out there it’s just you, the trail, and your thoughts. It was, and still is, something that I need to do for myself and my brother in order to sort through some hard realities.

Out of all the struggles you experienced while hiking this trail, which one would you say was the straw that broke the camel’s back?

Gosh, I would have to say it was the storm that began hitting me right away. I could also say that it was the weight of the pack, since I felt like I did pack too much. Not only that, but everything was wet around me and I couldn’t just set my pack anywhere to give my back a rest. The storm also drenched my hiking boots the first day, causing me to resort to my Tevas on the second day. That wasn’t the best scenario, either. Additionally, I’m sure the poor weather didn’t really support the emotional and mental goals I set out for myself. Sunshine would have been preferred.

Despite the hardships you faced, what was your favorite part about the trail?

Ooh, the wildlife was fantastic. I mean, hearing a snort right outside my tent that morning and then seeing a buck 45 minutes later, was pretty damn cool. Also, the feeling of just “being” was another meaningful highlight. Knowing that the only things on my agenda were food, water, and getting to the next destination somehow made me feel lighter.

What do you think it was that made you feel “unprepared?” What advice would you give to people who want to do this same hike, or a thru-hike in general?

There were several reasons I was unprepared. One, I should have checked the weather. Granted, some storms were bound to hit me but starting out my first long backpacking trip this way was a bit discouraging. Two, after living in Tennessee the past four years, I had forgotten how bad the mosquitoes were in Minnesota. Just from the two days out there, I was itching for days after because I didn’t bring strong enough bug repellent/DEET. The last reason was even though it’s good to push yourself, I maybe shouldn’t have overestimated my abilities. Neither should anyone else. While I do consider myself to be physically strong, that’s not all that counts. I overestimated myself, packed too much food, and did not set up enough resupply throughout the hike.

Can you tell us more about your frustrations when you needed to call your dad to pick you up? What was that like?

Oh man. After all of my planning and excitement about this hike, right then I felt like I was failing myself. I felt weak in that moment. Obviously, I was also worried about what others would think. As a bit of a perfectionist, I like to be a top-performer and hate disappointing others. I don’t cry very often, but leading up to and during the phone call I was crying. Crying because I didn’t want to give up, but I knew I had to. I knew I had to so I could give myself a better shot at this dream. There were so many things going wrong with this attempt that it almost didn’t feel “right.” This is why I say it would have felt like punishment if I had continued. This time around I was in over my head.

If you could go back and do it differently, would you, or how would you go about it?

No, I would not go back and do it differently for several reasons. This experience gave me the opportunity to spend a lot of time with my family since I had taken five weeks off from work. I was still able to go on some day hikes and short over-nighters on the Superior Hiking Trail. This has so far helped me to become more accustomed and comfortable with the SHT.

I also had the time to go on some short road trips in and around the Midwest. The biggest reason I wouldn’t change anything is t because I now know I can still feel passionate about a big dream even after what others may consider a major “fail.” Ironically, I now feel more hopeful and more excited about this hike than I previously did. Currently, I’m re-planning and re-strategizing for my second attempt that I’m looking to do in the fall of 2017.

What kind of “skills” do you think you need to practice before you can get out there again?

One, is I need to figure out a better method that will keep my equipment more dry during those rainy days. Two, is I need to strengthen my upper back muscles.

Do you have any suggestions for hiking the Superior Hiking Trail? Certain sections for beginners who want to get the hang of it?

Certainly do! The Silver Bay to Tettegouche State Park section is great. It features the Twin Lakes (Bean and Bear Lake) loop section, the High Falls of the Baptism River which is a must-see, and some of the best panoramic views you’ll ever see in your life. I also found many wild raspberries near the lower, Two Step Falls. Near the end of this section is a rock amphitheater once used as 3M Company’s first quarry with magnificent views of the Sawtooth Mountains and Lake Superior.

The Kadunce River Wayside to Judge Magney State Park section is also very exciting. It is the only section of the entire trail that runs along the shoreline of Lake Superior. Hiking on a pebble beach sounds nice, ya?

Lastly, the Judge Magney State Park to County Road 70 section is amazing. I didn’t hike this section this summer. A year ago I visited the Devil’s Kettle Falls with my friend, Marina. Those falls are considered one of “Minnesota’s Mysteries,” which are a category of weird, in-explainable things in the state. This section passes right by the falls. It is such a cool sight and interesting place.

Do you have any last thoughts, quotes, or pieces of advice you want to say before you go?

Taken from a quote (I’m not sure who originally said it) but slightly tweaked by my dear Aunt Judy, “When someone tells you, ‘you can’t do it,’ that is a reflection of their limits, not yours.”

As a woman attempting to hike this trail alone, prior to my first attempt I received a lot of shock and concern from others. Don’t let others tell you not to do something because for them it sounds too crazy. Don’t let a few mistakes or roadblocks kill your dream. Your passions, motivations, and reasons are bigger than anything trying to get in the way of your heart’s desires. If you have any good reason to do it, that’s enough fuel to get you from the beginning trailhead to the end… and on to the next trail.

Many times in the hiking world, people who achieve their hiking goals almost always outshine those who try, but couldn’t make it. Angela is only one of many people who probably had a similar experience, but were maybe too shy to reveal what happened. Angela’s story can hopefully encourage others to still follow their dreams, even when the going gets tough along the way.

Growing up in Minnesota, Angela spent half of her childhood in Corcoran and the other half in Big Lake. She currently resides in Nashville, Tennessee, but is moving to Portland, Oregon in October of 2016. She is a self-employed Nanny/Babysitter while going to school at Nashville State Community College for a degree in Social Work. In her free time she enjoys hiking, downhill skiing, running, checking out local breweries, traveling, and going on road trips. Follow her on Instagram @goettl_fabulous or send her an email.

previous Falling: One of the Most Dangerous Aspects of Hiking and How to Prevent It
next 10 Activity Ideas for Outdoor Enthusiasts on Labor Day Weekend

5 Must Have Snowshoeing Accessories for the Backcountry